Today the hubby called around 9am to wake me up and I immediately got up and got busy.

As soon as I got all the kids up and fed, we started school.  More specifically, we started math.  And since math seems to be our most time-consuming subject, we worked on it for the next two and a half hours.  :-p

Around 11:30am, I told the kids to wrap things up and get some lunch – then get ready to go to the dentist.   All six of them were scheduled for cleanings at 1:30pm today and it’s a 45 minute drive.  In the meantime, I also threw some chicken breasts in the crockpot to make Creamy Italian Chicken for supper.

Around that same time, my sister-in-law Ariel called and asked if she could borrow Sarah for an hour to babysit Perry Katherine.  She was trying to do some work for my parents and Perry K was not cooperating!  Joshua drove her over (it’s less than 2 miles) and dropped her off, then came home to finish getting ready to go.

At 12:30 we all loaded up, drove over to my Mama’s to get Sarah, then got on our way to Natchez to the dentist.

Note – I really wish I had taken more pics today, but it just didn’t happen.  I didn’t bring my camera with me and I my phone is glitchy, so I don’t always like using the camera on it. Anywho….

Joshua drove – I love having a chauffeur these days, by the way – and we got there just a couple of minutes late.  Sadly, all six of the kids had cavities.  Ugh.  I think it’s genetic –  or the fact that our county has no fluoride in the water – or maybe I’ve just failed at teaching them to brush well!?  Whatever the cause, it seems like we spend way too much time getting teeth fixed.

But Praise the Lord, I love our dentist and his staff and they are so sweet to always offer to schedule to do as many kids as possible during the same appointment (to save us multiple trips) so we’ll get them all fixed up in just two more appointments. 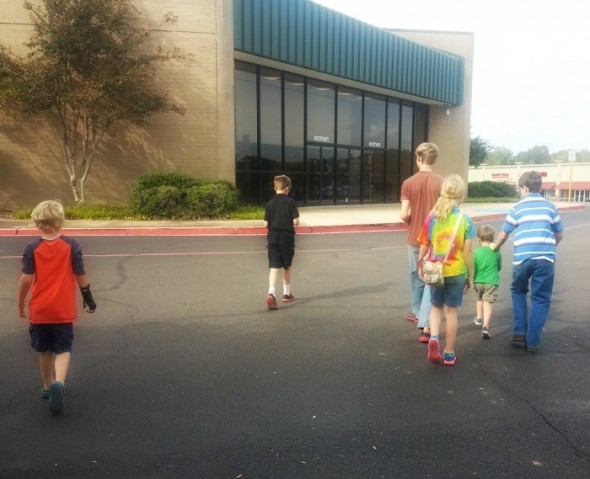 Anywho… we left there around 3:15pm and headed to the mall.  Next time you hear me talking about taking 6 kids to the mall… just go ahead and shoot me.   I’m just kidding… sort of.

I’ll preface this by saying that my kids don’t get to go to the mall… ever.  Like, really, never ever.  We got to Walmart  – but I avoid the clothes and shoes and toys most of the time – but mostly, I shop online and/or they were lots of hand-me-downs from older siblings and cousins.   So this was an exciting adventure for them.

But they were not really prepared for all the things to look at and browse and beg to have.  Neither was I.

But three of the kids really needed shoes and Joshua – who is getting SO tall and lanky – needed long-sleeved shirts that actually reached to the end of his arms.  And since I didn’t want to deal with ordering shoes online and having to ship them back and forth to find the right sizes, I thought a quick and easy trip to the mall might be the solution (since we were already very nearby).

Buhahahahahaha.  Quick?  Not.  Easy?  Definitely.  Not.

We did pretty well, financially speaking – hitting clearance racks and sales.  We spent just under $200 and got 4 pairs of shoes (Sarah snuck in a pair that she really, really wanted, but didn’t really need, but they were on clearance and she offered to pay for them with her own money) plus 11 shirts (Joshua got 7 shirts for under $60 and I got a few Christmas gifts marked off my list).

However, by the end of that last store, I was on the verge of tears and wondering what kind of crazy had taken over me when I decided to bring all 6 kids into the mall today.

Most of the kids were asking for things they didn’t need and laying on the guilt about how they don’t have any nice clothes (they do!) – some of them were playing chase and hiding under clothes racks (or climbing on top of them – I’m not kidding) – some of them had to pee – about 5 minutes after I said, “Hey – there’s the bathroom… does anybody need to go before we head to the other end of the mall?” and some of them kept running away every time I turned my back.

Asher had had a complete meltdown over a tractor that he needed… and then insisted he must have the $22 shoes instead of the $11 shoes.  They were the same brand and color and very near identical style (but not quite) but his 3 year old self needed the $22 ones (both were on sale down from $35).   Don’t judge me… but I bought both.

I know it probably wasn’t the best way to handle it, but as I suspected, by the time we got home he had forgotten about the $22 pair.  They will be returned.  Did that send the proper message to my child?  Probably not, but I was frazzled and we were both tired and I just needed him to not cry anymore in the store.  Pick your battles people… pick your battles.

OH and Noah decided to put on his new shoes in one store- and then 40 minutes later as we’re leaving the other end of the mall – he remembers that the box and his old shoes are still in that store.  Really??

After all that… I still had to go to Walmart. WHAAATTT?!?!   I called my husband and he gave me a pep talk – then we decided that it would be best for me to go in alone so I could, oh, I don’t know… stay sane.  I ended up letting Caleb come in with me.  He’s a great helper and he’s old enough to not ask for all.the.things.

So I left Joshua in the truck with the engine running and a movie playing and me and Caleb took off.  It still took me almost an hour but I got out with all of my ingredients needed for cake this week plus a handful of things we needed at the house.  By then it was 5:45pm.

We came straight home after that and after getting all the groceries unloaded and put away, I grabbed a shower then we sat down to eat supper (the chicken in the crockpot was ready and Richy had made rice and broccoli to round out the  meal).

After that?  Blogging, email, banking, and watching the Voice on TV (recorded on the DVR).