It’s been a looong day and I really need to get to bed, but I took some fun pictures today that I hope I can quickly upload and share!  We’ll see…

So, I woke up at 9:30.  I wanted to sleep until 10 since I was up until 3am working on cake pops, but I just couldn’t fall back asleep so I got up and got going!    Speaking of cake pops…

These are the lovely Eyeballs on a Fork Red Velvet Cake Pops that kept me up more than half the night .    So, when I got up, I had to get straight to work on my other orders.

I had to decorate lots of cupcakes, wrap cookies, and photograph everything and box them up.  Here are a few pics… 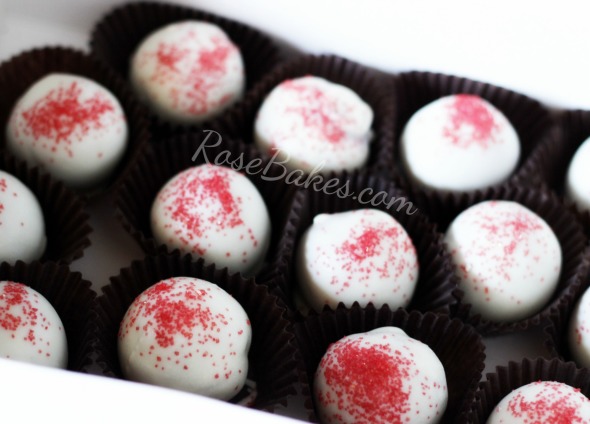 There were lots more, but I dont have all the pictures ready yet.  In total, I did 4 dozen cake pops/cake balls, 6 dozen cupcakes, a small cake, a dozen cookies and something else… I’m forgetting.

My first round of deliveries went out around noon, then the second round at 4pm.  My son Joshua did all of the delivering today which allowed me to stay home and keep working.   He also picked up frozen pizzas in town for supper so I wouldn’t have to stress over that tonight.

Around 3pm my hubby showed up at home very early from work!  He’s been in training all week and since class dismissed early today, he got to come home.  It was nice to spend a little extra time with him because he will be gone on a hunting trip most of the weekend.

I kept working – Richy played with the kids some, had them do a little picking up around the house – and then before I knew it, it was time for him to leave around 6:15pm.  🙁

We all hugged and kissed and prayed with him, then he was off for his fun adventure!   Sadly, I came right back in to work.  I still had to bake cookies for my orders tomorrow and roll out all the cake pops for the weekend’s orders.

I can’t tell you what time I finished them up, but sometime after that, my awesome-sauce sister showed up and brought me a bowl of Crawfish Chowder.  She makes the MOST amazing crawfish chowder I’ve ever had in.my.life. and if there was any reason to be happy that Richy was gone for the weekend… it was that I didn’t have to share… heehee.

Amanda stayed and visited for awhile and let the kids (cousins) all play, but poor thing, she was fighting a migraine and I could tell she didn’t feel well at all.  She mentioned that she still had to go home and bake brownies for her daughter’s class tomorrow and I hated that… so I quickly decorated some extra cupcakes for her.

I swear, I think God multiplied the cupcakes I had on hand.  I was pretty confident that I had enough extra to give her a couple of dozen, but I knew it would be cutting it close on still having enough for my orders.  It didn’t matter – I could easily bake more later but I hated for her to have to go home and bake when she was hurting so bad.

So, I made her a big box of these pretty “pumpkin cupcakes” for her daughter’s class and I couldn’t believe it after she left, but even boxing up my orders for tomorrow, I still had more than a dozen leftover.   God provided for her and I still had extras.  That was a sweet surprise!!

After she left, I continued to work, and work, and work some more.  I”m honestly not sure where the evening went because even after hours and hours in the kitchen, the only thing I completely finished was cookies for one order.  I did get the 3 tiers for one cake filled and frosted and carved – then covered in fondant – but I still have about a zillion hours of decorating to do on it.  Oy! 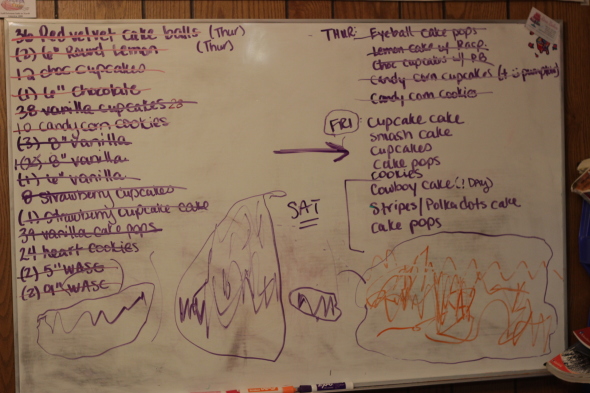 So, tomorrow will be another busy Friday… I’m sort of used to that these days.  But I do have all my baking marked off the list… now it’s the fun part – all the decorating!   All work and no play Thursday – Saturdays.    What do you think about Asher’s art there on my board?  At least he’s learned to not actually erase or damage my lists… he just scribbles all around them 😉  My cuti-pie!

Now it’s nearly 2am and I’m off to bed.  I just pray I can sleep… that doesn’t always happen when Richy’s not home.

PS – I had more pics on my phone but I’m too lazy to get up and go find it and then upload them right now… if there are any really good ones, I’ll try to add them tomorrow!